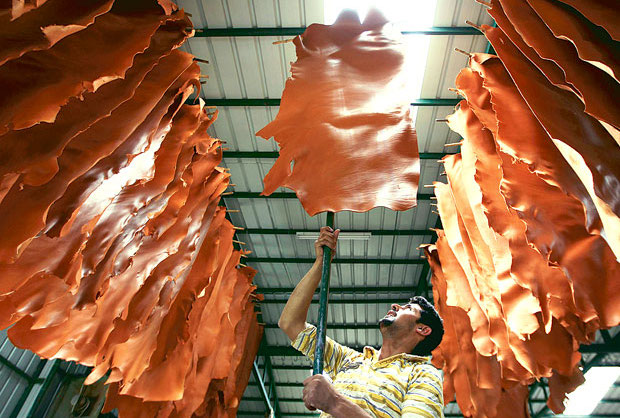 A man working in a tannery.

New Delhi: The tanneries in Uttar Pradesh, which had been ailing and ordered to be shut down during the Kumbh Mela so that the Ganga water isn’t polluted when it reaches Prayagraj, are now beginning to shift to West Bengal, where they had been recently welcomed with open arms by the state government.

The West Bengal government allotted land to at least 12 Kanpur-based tanneries in the presence of chief minister Mamata Banerjee after their applications were approved during the Bengal Global Business Summit. They are expected to resume their operations from West Bengal soon.

The Uttar Pradesh government had issued a directive to shut the 400 tanneries in Kanpur and 40 in Unnao district to stop waste disposal in the Ganga during the Kumbh Mela at Prayagraj.

While the approved applicants were told to collect the allotment letters on Friday – the second day of the Bengal Global Business Summit, Javed Iqbal, regional chairman, Council for Leather Export (Central Region, Kanpur), said, “The letters have been issued by the micro, small & medium enterprises and textiles department. The West Bengal government is giving us land at the rate of Rs 2,150 per square metre in Bantala area where Kolkata’s leather industry is situated.”

Talking to reporters, UP Leather Industries Association spokesperson Ashraf Rizwan said, “The tannery owners had also requested the West Bengal government to build a common effluent treatment plant for them,” and added, “We chose to shift our tanneries to Bengal because Kolkata is a metropolitan city and has an international airport. To export goods from Kanpur, we pay around Rs 50,000 per container for the journey to the seaport. In Kolkata, the sea is closer. Labour hands are also easily available there.”

Ashraf, who is also a tannery owner, said, “We have been falsely accused of polluting the Ganga. The industry has always been under threat of orders to shut down the tanneries completely. Hence, we decided to shift to the other state.”

• Priyanka Gandhi speculated to be next Congress chief
• Election Commission warns political parties not to use armed forces for campaign
• Shatrughan Sinha joins Congress, says BJP progressing towards ‘dictatorship’
• BS Yediyurappa sworn in as CM of Karnataka for 4th time
• Karnataka Congress finds 4 of its MLAs short in headcount, moves the rest to resort ‘to protect them from BJP’