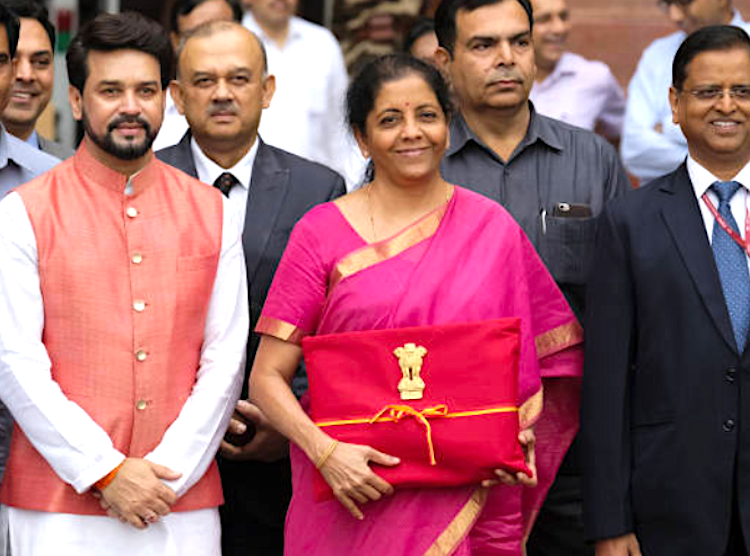 Nirmala Sitharaman with the Union Budget 2019.

New Delhi: The government unveiled the full-fledged Union Budget for the current financial year, on Friday. Union finance minister Nirmala Sitharaman presented the Budget in Parliament. Breaking from the tradition of carrying the Budget papers in a briefcase, Sitharaman entered the Parliament with the Budget sealed in the shape of a “bahi khata” (Indian traditional ledger), wrapped in red cloth with the national emblem on it.

Sitharaman, while thanking voters who re-elected the Narendra Modi government with thumping majority, said, “The recent election was charged with brimming home and desire for a bright and stable ‘New India’. Voter turnout was highest; every section came to stamp their approval for performing government.”

Sitharaman, in her maiden Budget, maintained the status quo on income tax slabs and rates. However, the government allowed an additional deduction of up to ₹1.5 lakh against interest paid on loans taken by March 31, 2020 to buy houses worth up to ₹45 lakh. The government said the move will lead to a benefit of around ₹7 lakh to middle class home-buyers over 15 years.

She also revised the target of fiscal deficit to 3.3 per cent for 2019-20 from 3.4 per cent. This came as a surprise for some economists who had expected the target to be eased further.

The finance minister allocated an outlay of ₹62,659.12 crore for the healthcare sector in the current financial year, which is the highest in the last two financial years. ₹6,400 crore has been earmarked for Ayushman Bharat – the Centre’s flagship health-insurance scheme.

For the education sector, Sitharaman ₹400 crore to create “world-class institutions”. This is a threefold increase compared to the revised estimates for 2018-19.

Sitharaman proposed a few changes in terms of excise duty and cess by increase in each by 1 rupee per litre on petrol and diesel. Import duty on precious metals such as gold has been raised to 12.5 per cent from 10 per cent.

In addition to this increment, the government also raised the basic customs duty applicable to a range of products such as tiles, cashew kernels, vinyl flooring, auto parts, some synthetic rubber, digital and video recorder and CCTV camera.

Other key highlights include:

Meanwhile, Prime Minister Narendra Modi said the Union Budget presented, on Friday, is “one of hope” and “it is a budget that will boost India’s development in the 21st century”.