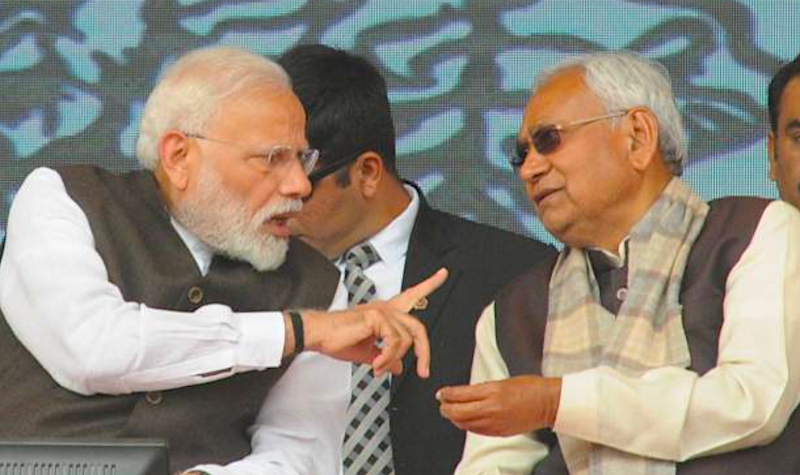 New Delhi: Three days after BJP’s Bihar ally JD(U) refused to accept a “token” seat in the Narendra Modi-led Union Cabinet, Bihar chief minister Nitish Kumar expanded his own cabinet in Bihar and offered the BJP just one seat. However, the BJP is yet to accept the offer.

In Kumar’s cabinet expansion, eight ministers from his Janata Dal (United) have been selected.

According to reports, Nitish Kumar had sought three ministerial berths for his party but the Bhartiya Janata Party had rejected his demand and offered one Cabinet berth at the Centre. After that Kumar refused to be a part of the Modi Cabinet.

Despite this apparent tiff, Kumar has rejected any differences between the two parties. Talking to reporters at Patna’s Raj Bhavan, he said, “Everything is fine between the BJP and JD(U).” He added that BJP leaders were not keen to name a person for the cabinet post. There were eight vacancies from the JD(U) quota in the state cabinet. Other allies have very nominal vacancy from their quota. Therefore, only JD(U) leaders were inducted on Sunday. There is no issue with BJP.”

While responding on the Bihar cabinet expansion, senior BJP leader and deputy chief minister of the state Sushil Kumar Modi wrote on Twitter that the BJP will fill the vacant berth in future.

Nitish Kumar has offered Bjp to fill the vacant ministerial seat.Bjp decided to fill it in future .

It is worth noting that, on Thursday, Nitish had said JD(U) decided to stay out of the Modi Cabinet as it did not want a token participation. It triggered speculation that there might be differences between the two allies.

Pointing out to the number of ministers at the state, senior BJP leader and state minister said as per the agreement among NDA allies In Bihar, the distribution of ministerial berths has been done based on the number of MLAs with each party. Accordingly, JD(U) can have 20 ministers, BJP 14 and LJP one.”

In the Lok Sabha election, Nitish Kumar’s JD(S) won 16 seats, the BJP 17 and the third ally, Lok Janshakti Party, won 6 in Bihar. Together they won 39 out of the 40 seats from the state.