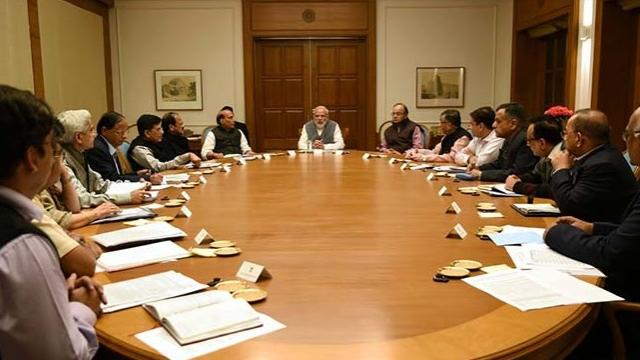 Narendra Modi in a Cabinet meeting.

New Delhi: In a significant move ahead of the Lok Sabha election, the BJP-led NDA government, on Monday, approved a 10 per cent reservation in jobs and higher education for “economically backward” sections in the general category.

On Monday, the Union Cabinet approved a proposal the Constitutional Amendment Bill extending the benefits of quota to the “economically weaker” sections of the people who are “not covered by any of the existing schemes” of reservation.

The Constitution doesn’t allow more than 50 per cent reservation.

On Tuesday, the bill will be tabled in Parliament on the last day of the winter session. The proposed reservation will be over and above the existing 50 per cent reservation given to the scheduled castes, scheduled tribes and the other backward classes, taking the total reservation to 60 per cent.

Once the bill is passed it will give some relief to the poor among the general castes and classes.

People who come in the EWS in general category are those whose family income is below Rs 8 lakhs per annum and own less than 5 acres of land would be eligible, and the person’s residential house should be below 1,000 square feet, and the residential plot should be below 100 yards in a notified municipality area and below 200 yards in a non-notified municipality area.

Clearly, this big move is made to woo members of the so-called upper castes, just ahead of the general elections. Most opposition parties called it a trick to attract the so-called upper-caste voters for the elections but are not likely to oppose bill. However, it is likely to fail in the Rajya Sabha, where the NDA is in minority.

Abhishek Manu Singhvi, Congress spokesperson, tweeted that the government announced this decision only three months before the model code of conduct and called this a “gimmick” before the general elections.

See last two tweets re reservation 4forwards? Qs—did u nt think of this for 4 yrs 8 mths? so obviously thought of as election gimmick 3mths b4 model code! (3) u know u cannot exceed 50% maxima so it is done only to posture tht u tried unctal thing (4) do u hv majority 4ctal am?

The former finance minister, Yashwant Sinha, who quit the BJP last year, called it a “jumla” (gimmick). He said that this move with the judicial complications is undesirable and that the government have no time to get it passed through Parliament.

The proposal to give 10% reservation to economically weaker upper castes is nothing more than a jumla. It is bristling with legal complications and there is no time for getting it passed thru both Houses of Parliament. Govt stands completely exposed.

Arvind Kejriwal, Delhi chief minister, promised to support but tweeted saying the move would be just an election stunt if the constitutional amendment is not passed immediately.

I agree. The govt shud extend Parl session and bring constitutional amendment immediately. Else it is merely an election stunt. https://t.co/J5weTkG5cA