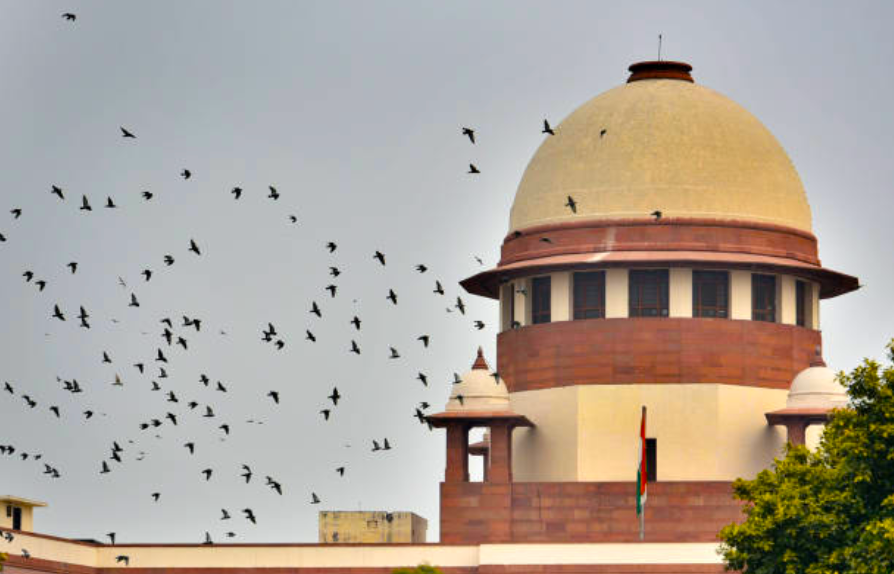 New Delhi: A five-judge Constitution bench of the Supreme Court of India, led by Chief Justice of India Ranjan Gogoi, unanimously delivered the long-awaited verdict in the decades-long Ramjanmabhoomi-Babri masjid Ayodhya land-dispute case, on Saturday. The bench, comprising CJI Ranjan Gogoi, Justice Sharad Arvind Bobde, Justice Dhananjaya Yeshwant Chandrachud, Justice Ashok Bhushan and Justice S Abdul Nazeer, ruled that the disputed land be given to a government-run trust for building a temple and separately a five-acre plot at a “prominent site” in Ayodhya for a mosque.

While delivering the historic verdict, which was aimed at ending the bitter decades-old bitter legal case that had divided the Hindus and Muslims in the country, the apex court noted that the demolition of 460-year-old Babri masjid (mosque) in December 1992 was a violation of law. The court ordered the government to formulate a scheme within three months under the Ayodhya Act 1993 and set up a trust, which will oversee the building of the Ram temple. Till the trust is formed, the ownership of the site will rest with the central government.

While delivering the judgment, the Supreme Court said: “There is adequate material in ASI (Archaeological Survey of India) report to conclude that the Babri masjid not constructed on vacant land. There was a structure underlying the disputed structure. The underlying structure was not an Islamic structure. But the ASI report does not say if the structure was demolished for the mosque. It has left unanswered this critical point – whether temple was demolished for mosque.”

The CJI-led bench said, “This court must accept faith and accept belief of worshippers.”

The Babri masjid before its demolition.

While delivering the judgment, the court also dismissed the suit of the Nirmohi Akhara, which claimed priestly rights over the disputed site. However, the court ruled that Nirmohi Akhara be given proper representation in the trust that the court ordered to be set up.

The court also dismissed the Shia Central Waqf Board claim against the Uttar Pradesh Sunni Central Waqf Board – the main litigant from the Muslim side claiming the disputed land. The Shia body had said the land belongs to it because the mosque was constructed by Babur’s commander Baqi Tashqandi, also known as Mir Baqi or Mir Banki, who was a Shia. It also said a temple should be allowed to build over it. The court dismissed the Shia body’s claim saying the land belonged to the government according to revenue records. 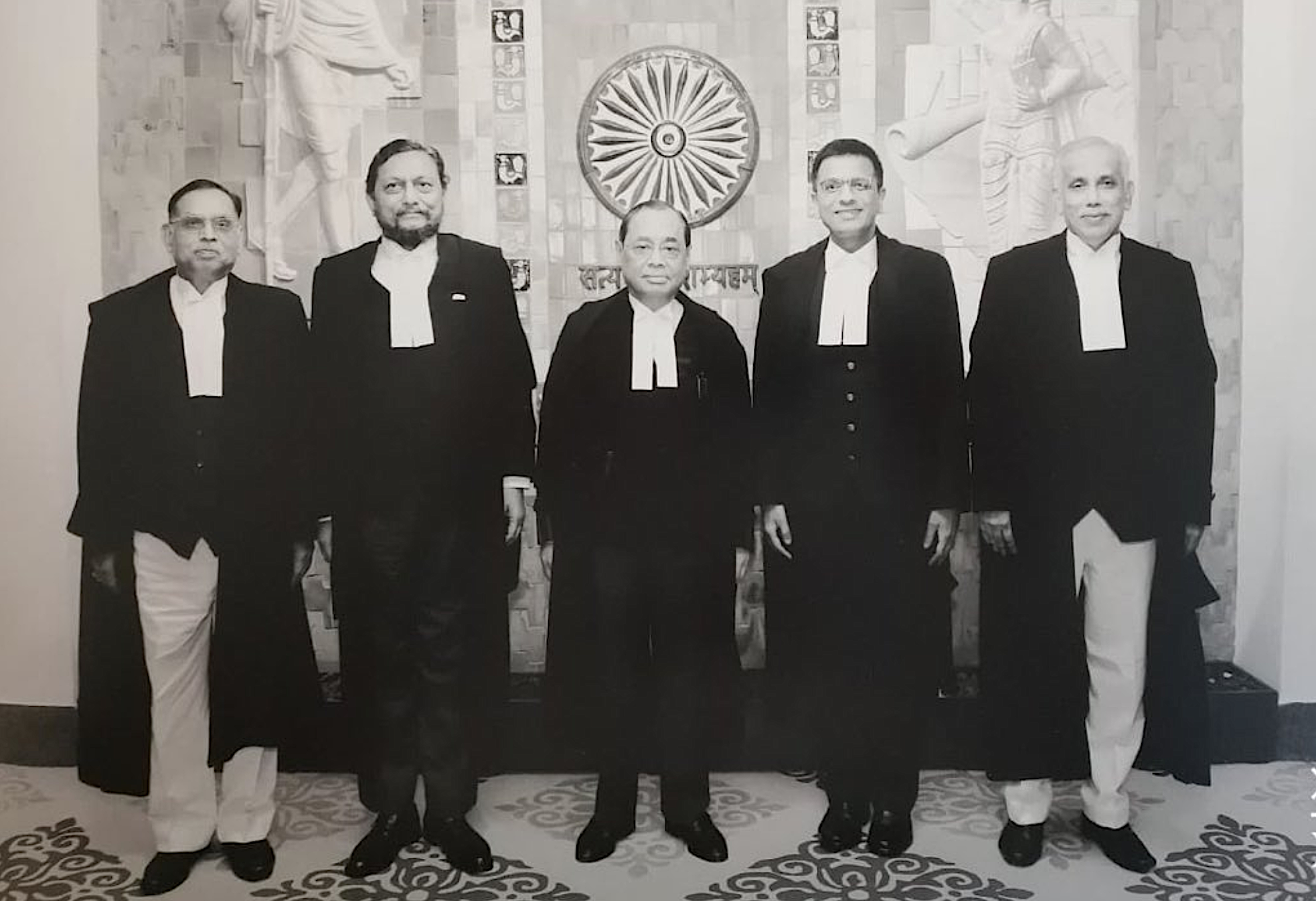 Key points in the Supreme Court judgment in the Ramjanmabhoomi-Babri masjid dispute:

Earlier in March, the Supreme Court urged for mediation between the disputing parties to arrive at an out-of-court settlement in the case. However, when the negotiations failed, the CJI-led bench started a day-to-day hearing of the case from August 6.

The prime minister, Narendra Modi, in a series of tweets said the Supreme Court verdict on the Ayodhya case shouldn’t be seen as a win or loss for anybody. He said the judgment is notable because the judgment shows that any dispute can be “amicably solved in the spirit of due process of law”. It “reaffirms the independence, transparency and farsightedness of our judiciary”. It “clearly illustrates” everybody is equal before the law.

The prime minister also said: “The calm and peace maintained by 130 crore Indians in the run-up to today’s verdict manifests India’s inherent commitment to peaceful coexistence. May this very spirit of unity and togetherness power the development trajectory of our nation. May every Indian be empowered.”

BJP patriarch and former deputy prime minister, Lal Krishna Advani, who led the first nationwide movement for the construction of a Ram temple on the disputed site in Ayodhya, welcomed the Supreme Court verdict. Talking to reporters, he said, It is a moment of fulfilment for me because God Almighty had given me an opportunity to make my own humble contribution to the mass movement, the biggest since India’s Freedom Movement, aimed at the outcome which the Supreme Court’s verdict today has made possible.

The Uttar Pradesh Sunni Waqf Board, which was one of the litigants in the case, said it welcomed Saturday’s Supreme Court verdict on the long-running dispute. The board’s chairman, Zafar Ahmed Farooqui, said the board will not seek a review of the judgment. He also said the board will issue a detailed statement after going through the verdict thoroughly.

Asaduddin Owaisi, All India Majlis-e-Ittehadul Muslimeen chief and member of Lok Sabha from Hyderabad, expressed his disappointment over the Supreme Court judgment. He termed the verdict as a “victory of faith over facts”. Talking to reporters, he said, “The Supreme Court is supreme, but not infallible,” adding “These are not my words ... I’m reiterating the words of Justice JS Verma, who the Sangh Parivar held in high esteem.”

Owaisi also called upon the Muslims to reject the five-acre plot for a mosque as ordered by the Supreme Court. He said, “Muslims in India are poor, but we are not in such a pitiable state that we can’t buy five acres of land in Uttar Pradesh to build a place of worship. … even the people of Hyderabad can give me enough money to buy land in UP for a mosque. We don’t need land … this was a fight for our legal rights.”

Tight security around the country

In view of the Supreme Court verdict on the Ayodhya dispute, security has been beefed up in sensitive areas all across the country. Schools and educational institutions in Delhi, Uttar Pradesh, Madhya Pradesh, Jammu and Karnataka remained closed on Saturday. The UP chief minister, Yogi Adityanath, urged people not to pay heed to rumours. The UP Police have also warned citizens not to ferment trouble and said that a strict watch will be kept on social-media users.

A man called Sanjay Rameshwar Sharma, 56, from Maharashtra’s Dule was arrested, on Friday, for posting an “objectionable” update on Facebook. Another person, Lakshman Sharma, was arrested by UP Police in Meerut for a “provocative” Facebook post, on Saturday. Yet another man was arrested for bursting crackers in Meerut following the verdict.

As reported earlier, security in Ayodhya town had already been tightened. Restrictions under Section 144 of the Criminal Procedure Code has been imposed in the town and gathering of four or more people at public places has been banned from October 12 and it will continue until December 10 in view of the festival season.