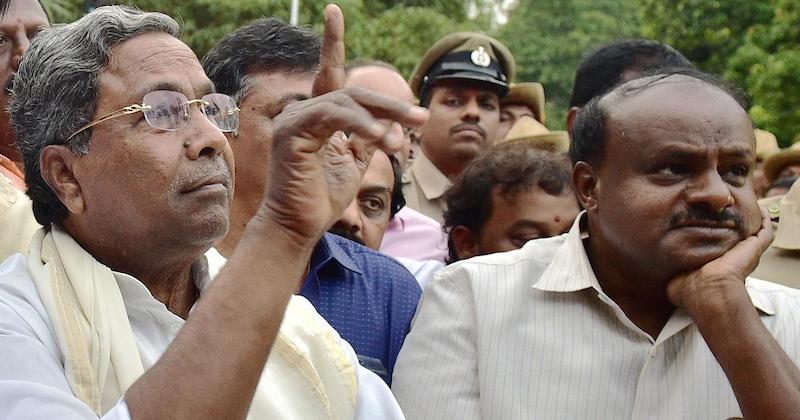 New Delhi: In Karnataka, the differences between the Congress-Janata Dal (Secular) coalition government are increasing. To firefight the precarious situation, chief Minister HD Kumaraswamy met Muniyappa and Nagesh who requested ministerial posts for themselves. Nagesh was accompanied by water resources minister DK Shivakumar, who returned from Australia on Monday night.

This comes after many Congress leaders rebelled against the party and ministerial posts. To placate them, senior leaders in the government decided to give in to the rebel Congress leaders’ demands. However, this decision by the party leaders has increased the problem further as the party loyalists are annoyed with this.

Nagesh said, “DK (Shivkumar) also said that injustice was done to me. He had taken me to CM.” On this, DK Shivkumar said, “As Gandhi said, ‘speak no evil, look no evil or hear no evil,’ I have decided that I will not say anything on these developments.”

According to a Times of India report, Congress MLA Ajay Singh said the loyalists should have been given ministerial responsibilities, but it is unfortunate that rebel leaders are being given the ministerial posts. Singh also claimed that the BJP had invited him to join their camp, but as a “true Congressman”, he refused to leave the party.

Ajay Singh, V Muniyappa, H Nagesh, Ramesh Jarkiri, BC Patil, B Nagendra and Bhima Naik are in the race to be ministers. Apart from this, two Congress MLAs ST Somashekar and Baitarai Basavaraj met CMH Kumaraswamy and presented their claim for the post of minister.

Significantly, in the Karnataka government, there are three posts vacant in the cabinet, two of which will be met by the JD (S) and one will go to the Congress account. At the same time, many ministers have also offered to quit as ministers to stop the ongoing agitation. These include Krishna Beragowda, Jayamala, Priyank Kharge and UT Khader.

BJP has 105 members in the 225-seat assembly and it is the largest party. However, the ruling coalition has 117 members, including 79 of Congress, 37 of JD (S) and one legislator from Bahujan Samaj Party (N Mahesh).

In such a situation, the BJP has been trying to take advantage of this quarrel. If it succeeds in it, it would be another big blow to the Congress.