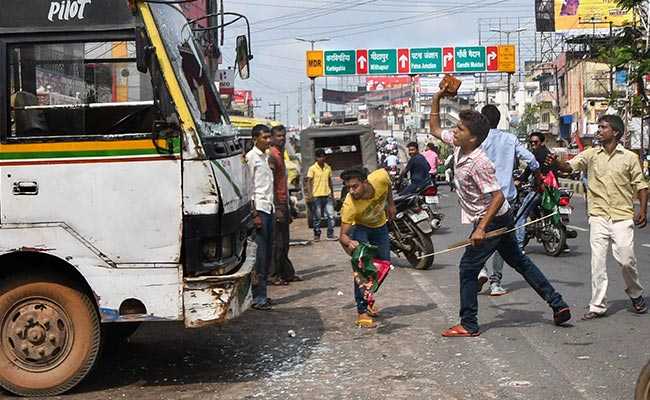 New Delhi: The Congress and other opposition parties jointly called for a nationwide shutdown (Bharat bandh), on Monday, to protest against the Narendra Modi government’s failure to control the rising prices of petrol and diesel in the country. On Monday morning, the Congress president, Rahul Gandhi, also led a protest march against the government from Rajghat to Ramlila Maidan in the capital.

The Congress had, on Thursday, announced that it will call for a Bharat bandh to protest against the rising fuel prices in the country and said that it would take other opposition parties on board for the same. While the Congress had called for a six-hour nationwide shutdown from 9am, the CPM announced the same for 12 hours starting 6am.

Meanwhile, on Sunday, petrol price reached up to Rs 80.50 per litre in Delhi, while diesel touched its highest-ever level of Rs 72.61 a litre in the city.

Randeep Surjewala, Congress spokesman, said, “The Congress party has decided that we will be giving a call for Bharat bandh on September 10, Monday, in order to highlight the Rs 11 lakh crore fuel loot and to demand an immediate reduction in central excise duty as also excessive VAT in the state,” adding that the timing of the bandh was kept such that “the common person is not inconvenienced”.

The Congress claimed that 21 parties are extending their support to its call for the Bharat bandh. Parties which supported Congress included the JD(S), MNS, RJD, HAM(S), Samajwadi Party, NCP, CPM, DMK, and BSP.

Mamata Banerjee refused to be a part of the protest. Earlier, the Trinamool Congress had said that it will organize street protests but won’t appreciate a shutdown in West Bengal.

The impact of the Bharat band was felt in Congress-ruled states along with several other states, like Maharashtra, Bihar, Karnataka, Odisha, and Tamil Nadu.