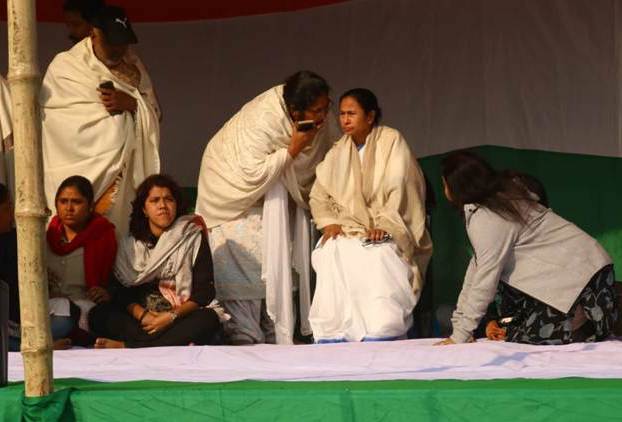 Mamata Banerjee at the dharna site.
New Delhi: West Bengal chief minister Mamata Banerjee continued her dharna in Kolkata over the CBI investigation in chit-fund cases, which involved a stand-off between the Kolkata Police and the central agency when the latter went to interrogate the Kolkata Police commissioner, Rajeev Kumar. The issue has moved to the courts on Monday, with the CBI moving the Supreme Court and the West Bengal government moving the Calcutta high court.

The whole scene started when a team of Central Bureau of Investigation officers went to the residence of the Kolkata Police chief, on Sunday evening, where the city police stopped them and took them to the nearest police station. After this, Banerjee started her dharna (sit-in protest) and claimed that this was a “coup” attempt by the Narendra Modi-led central government against her state government. As the dharna continued and the issue kicking controversy in the country, the CBI, on Monday, moved to the Supreme Court and accused the police commissioner of destroying the “crucial evidence” related to the scam.

A bench comprising Chief Justice Ranjan Gogoi and Justice Sanjeev Khanna asked the CBI to place all evidence before it by means of an affidavit while saying it would come down heavily on Kumar if he “even remotely” tries to destroy the evidence.

Meanwhile, the West Bengal government filed a petition in the Calcutta high court against the CBI’s attempt to question Rajeev Kumar at his residence. The advocate general of West Bengal, Kishore Dutta, argued that despite a stay by the high court on steps regarding notice to state police officials, the CBI sought to enter Kumar’s residence, on Sunday, and interrogate him. He argued that the high court is scheduled to hear the matter on February 13 and because of this, the CBI’s attempt to enter Kumar’s official residence was in violation of its order.

The high court, however, refused an immediate hearing and listed the matter on Tuesday.

Mamata Banerjee has received poring support from the opposition leaders across the country - from the Congress president, Rahul Gandhi, to the PDP chief, Mehbooba Mufti, almost all opposition leaders have express solidarity with “Didi”. However, the BJP has stated that it was Congress that had filed a petition in the Supreme Court asking for an investigation into the chit fund scams. “We took oath on May 26, 2014, so all these inquiries in Narada, Saradha scams started before us,” law minister Ravi Shankar Prasad said.