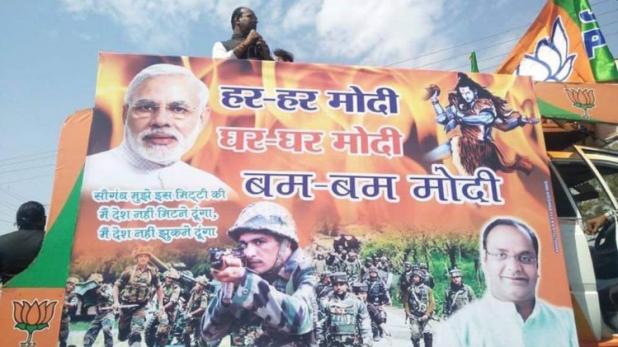 New Delhi: Over 150 defence veterans have purportedly written an open letter to President Ram Nath Kovind against political parties using the military for their political objectives, especially during the election season. Media reported that the letter was sent to the president on the first day of the Lok Sabha election, on Thursday.

In the the letter, which was shared to the media, the military veterans urged the president “to take all necessary steps to urgently direct all political parties that they must forthwith desist from using the military, military uniforms or symbols, and any actions by military formations or personnel, for political purposes or to further their political agendas.”

The letter says: “... we write to bring to your attention, as the Supreme Commander of India’s Armed Forces, some concerns which have caused considerable alarm and disquiet among both the serving and the retired personnel of our Forces. [Sic]”

The former defence officials also mentioned the use of Wing Commander Abhinandan Varthaman’s photos in poll posters and banners. Recently supporters and leaders of BJP have been seen wearing military uniforms and using posters and banners with pictures of soldiers and especially of Wing Commander Abhinandan Varthaman, who shot down a Pakistan F-16 with his MiG-21 Bison fighter during February’s aerial engagement with Pakistan’s air force.

Notably, eight former chiefs of Army, Air Force and Navy appear to have signed this letter.

The veterans’ letter to the president triggered an uproar, with the opposition seizing the opportunity to attack the ruling Bharatiya Janata Party. However, following the uproar,  media quoting Rashtrapati Bhavan sources reported that the president has not received any such letter in this regard.

Some veterans deny signing the letter

According to reports, former Army chief General Sunit Francis Rodrigues said he was not aware of that letter, which was sent to the president. He said, “Don’t know what it (letter) is all about. All my life, we’ve been apolitical. After 42 years as an officer, it’s a little late to change. We always put India first. Don’t know who these people are. It is a classic manifestation of fake news.”

Speaking on similar lines, former Air Force chief Air Chief Marshal Nirmal Chandra Suri also said he was not informed. He said, “My consent has not been taken for any such letter. I don’t agree with whatever has been written in that letter. We have been misquoted.”

Reacting to the “open letter” by defence veterans, including former services chiefs, the defence minister, Nirmala Sitharaman, told reporters that “fake letters” are being signed by some “vested groups”.

The defence veterans’ “open letter” to the president: