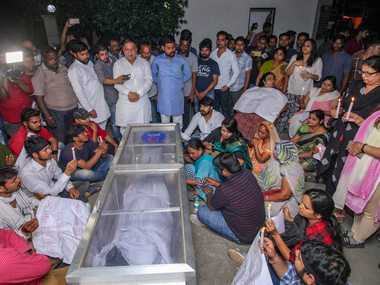 Vivek Tiwari’s body after being brought to his home in Lucknow.

New Delhi: Lucknow woke up to the shocking news of an Apple executive being shot dead by the police, on Saturday. Victim, Vivek Tiwari, who was working in Apple as the sales manager, was shot dead by a constable when he did not stop his SUV during a routine checking on late Friday night.

The incident happened in the city’s Gomti Nagar area at around 1.30am when the victim was returning home late with a female colleague after attending an event of the company.

Sana Khan, Tiwari’s female colleague and eyewitness to this case, told the media that two policemen on a motorcycle tried to stop the car. This scared Tiwari and he tried to escape. The cops then chased his car and one of them fired at him. The bullet hit Tiwari’s neck and he was killed on the spot.

However, the police constable, Prashant Kumar Chaudhary, who shot Tiwari had a different story to tell. He said Tiwari was trying to run his car over him with an intention of killing him. Chaudhary also demanded that his FIR be registered for the same.

The police refused to lodge an FIR on behalf of Chaudhary and he and the other constable who was with him have been arrested on the basis of the FIR lodged by Sana Khan.

According to media reports, the Uttar Pradesh chief minister has been quoted as saying: “This was not an encounter. The guilty will not be spared and, if needed, a CBI inquiry will be held.”

The Uttar Pradesh director general of police, OP Singh, called the incident a “murder” and constituted a special investigation team. It would be headed by the inspector general of police (Lucknow range) and would comprise the superintendent of police (crime branch) and the Lucknow (rural) superintendent of police. Singh also said that a magisterial inquiry into the incident has been recommended.