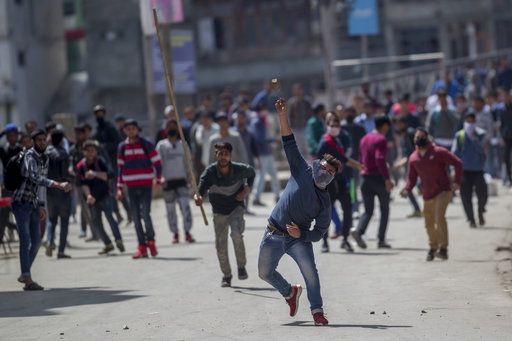 Youths pelting stones during a protest in Kashmir.

New Delhi: In yet another stone-pelting incident, protesters in Jammu & Kashmir, on Sunday, killed the driver of a civilian truck after mistaking the truck for a vehicle belonging to the security forces.

According to the police, the driver, Noor Mohammed Dar, 42, resident of Zradipora Uranhall locality of south Kashmir’s Anantnag district, was hit on his head by the stones hurled by the protesters. He was returning home when protesters mistook his truck for a vehicle of the security forces deployed in the valley. The driver was immediately rushed to a nearby hospital and later to Sher-e-Kashmir Institute of Medical Sciences at Soura in the outskirts of Srinagar, where he was declared brought dead.

The Jammu & Kashmir Police have confirmed the death.

Following this, two youths have been arrested, on Monday, and six others detained for questioning in the connection with the stone-pelting incident, which led to the death of the truck driver.

The police have also confirmed that the director general of J&K Police, Dilbag Singh, has asked officials to apprehend the culprits and to ensure strict action against them.

A few stone-pelting incidents have been reported in the Kashmir valley this month after declaration of dilutionof the Article 370 and scrapping of the Article 35A that gave special status to the erstwhile Jammu & Kashmir state and bifurcation of the state into two Union territories.

Major security measures have been adopted to ensure peace in the valley days before implementing these administrative changes. Senior leaders and former chief ministers of J&K, Mehbooba Mufti and Omar Abdullah, have been kept under house arrest as a precautionary step.