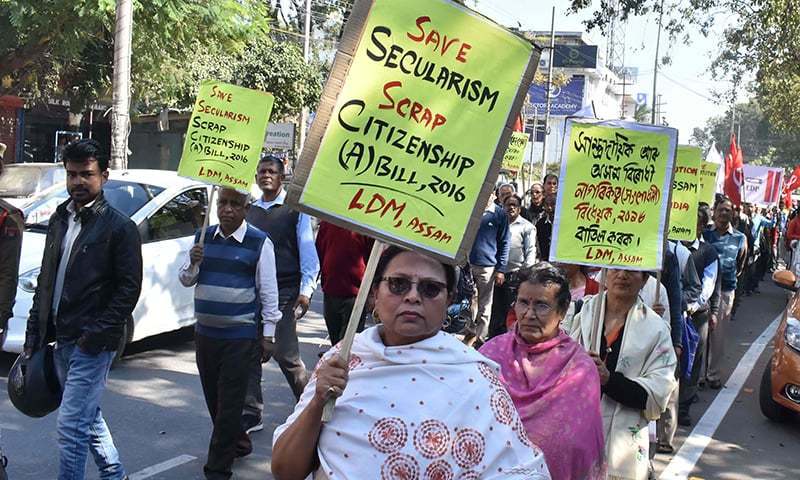 Left activists in a protest march against Citizenship (Amendment) Bill, in Guwahati.

New Delhi: The Lok Sabha, on Tuesday, passed the Citizenship (Amendment) Bill, 2016, which seeks to grant Indian citizenship to undocumented non-Muslim migrants from Afghanistan, Bangladesh, and Pakistan. Apart from the opposition Congress and the Left parties, several other parties, including some BJP allies, vehemently opposed the bill.

The northeastern states observed a daylong shutdown in protest of the bill and the region also witnessed sporadic violence. There have been reports of several people being injured in Assam, which has been witnessing nonstop protests since the Narendra Modi government said, on Monday, that it will push for the bill to be passed in Parliament. This also prompted the Asom Gana Parishad to break its alliance with the BJP in protest and walked out of the coalition government in the state.

Apart from this, the BJP spokesman in Assam, Mehdi Alam Bora, resigned from the party in protest.

There have been reports of violence from Tripura in protests against the bill. In western Tripura, CRPF personnel had to fire upon a mob injuring six tribal youths. In Mizoram, an 11-hour shutdown called in protest against the bill completely paralysed the state.

The issue of undocumented migrants is a sensitive issue in the northeast. Locals believe that migrants from Bangladesh have changed the demographics of region and eating into their resources. They also believe that these migrants are the reason behind the increase in crimes and made their lives harder.

The bill seeks to amend the Indian Citizenship Act of 1955 to grant Indian nationality to Hindus, Sikhs, Buddhists, Jains, Parsis and Christians, who fled religious persecution from the three neighbouring countries and entered India before December 31, 2014. This, however, doesn’t allow Muslims fleeing persecution from the neighbourhood — notably the Rohingya from Myanmar.

The political parties and activists in Assam are opposing the proposed amendment in the existing law say it would allow citizenship to illegal Hindu migrants from Bangladesh, who came to the state after March 1971, which is a violation of the 1985 Assam Accord.