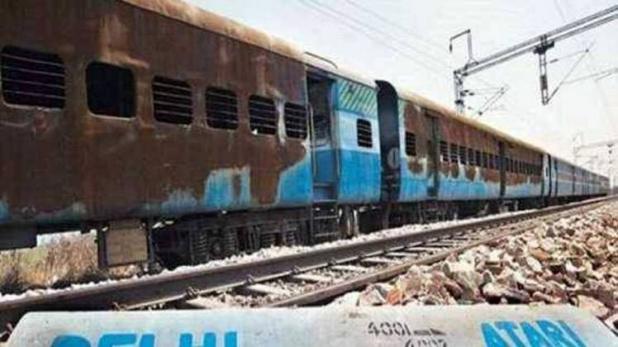 The Samjhauta Express after the blast.

New Delhi: The National Investigation Agency special judge, Jagdeep Singh, who delivered the verdict on the Samjhuata Express blast case, remarked that a “malaise has set in the investigating agencies”, which identify terror attacks by the perpetrator’s religion.

The judge, on Wednesday, acquitted all the four accused in the 2007 Samjhauta Express blast case, in which 68 people, mostly Pakistanis, were killed.

Among those the judge, Jagdeep Singh, acquitted is self-styled monk Naba Kumar Sarkar alias Swami Aseemanand. Apart from Aseemanand, the other three accused who were acquitted are: Lokesh Sharma, Kamal Chauhan and Rajinder Chaudhary.

The judge had, on multiple occasions, noted that the NIA had described the Samjhauta blasts as a revenge of jihadi attacks on Hindu temples in its chargesheet against Aseemanand, Lokesh Sharma, Kamal Chauhan and Rajinder Chaudhary.

While the four were acquitted on March 20, the NIA judge said, “A criminal element, belonging to a particular religion, community or caste, cannot be projected as representative of such particular religion, community or caste and branding the entire community, caste or religion in the name of such criminal element(s) would be totally unjustified and it would be in the best interests of humankind to nip such tenancies in the bud lest we should be heading towards intense civil war or be caught in a whirlpool of fratricide.”

The judgement was made public on Thursday.