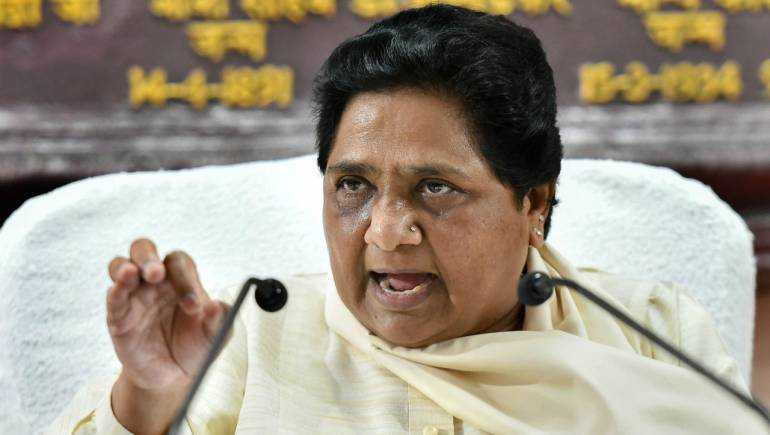 New Delhi: Bahujan Samaj Party chief Mayawati has rejected the possibility of an alliance with the Congress, on Wednesday, and said that her party will contest the assembly elections alone in Madhya Pradesh and Rajasthan. While announcing this, she attacked the Congress and accused the party of trying to crush the BSP. She also questioned the Congress's intention to defeat the Bharatiya Janata Party.

Mayawati had earlier announced that her BSP would tie up with Ajit Jogi's party for the Chhattisgarh assembly election. Earlier this year, she made a deal with a regional party in Karnataka. She said she can go with regional parties but certainly not with the Congress.

Announcing this at a news conference, the former UP chief minister blamed the Congress’s “stubborn attitude” and “arrogance” and said though Rahul Gandhi and Sonia Gandhi came in favour of this alliance, there were many “senior leaders” who foiled any kind of understanding between the two parties. Mayawati alleged that just like BJP, the Congress had not mended, and betrayed her party.

She said, “Congress leaders like Digvijaya Singh don’t wish for a Congress-BSP coalition. He is afraid of agencies like the ED, CBI.” She further said, “Digvijaya Singh, who is a BJP agent, is making statements that Mayawati has too much pressure from the Centre, so she does not want this alliance … which is baseless.”

Mayawati also claimed that looking at attitude of Congress it was clear that it wasn’t very serious to stop the BJP from retaining power (in the Centre and states) and was “interested in finishing the BSP by harming her party”.

Randeep Surjewala, chief spokesperson of congress, said the main goal of the party’s is clear and it is to defeat the BJP, so if any party walks with us in achieving that are welcome. Otherwise, he said, there would be a “healthy contest” for the fight against the BJP. “It’s nothing wrong” he said, “as happened before.”

Ram Madhav, the general secretary of the BJP, took a dig on opposition over trying to form an anti-BJP alliance. He said, “The mahagathbandhan (grand alliance) is ‘work in progress’. First, the Aam Aadmi Party and now the BSP is calling it a ‘bluff’. Mayawati described the Congress as arrogant, it is a new akashvaani (divine message) for them. There is no announcement of any coalition in Madhya Pradesh and Rajasthan. Chhattisgarh has already been dumped.”