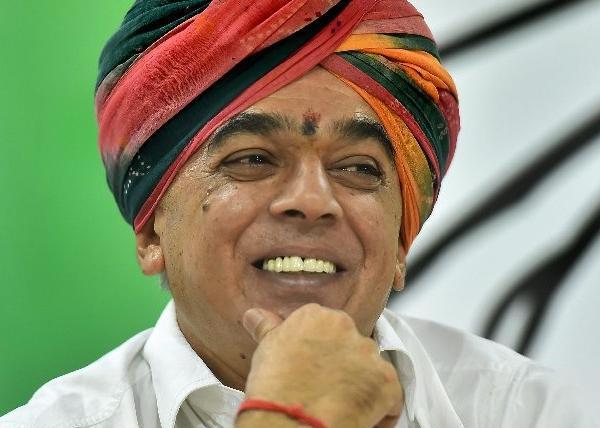 New Delhi: Manvendra Singh, rebel BJP MLA from Rajasthan and son of former Union minister Jaswant Singh in the Atal Bihari Vajpayee Cabinet, has on Wednesday, joined hands with the Congress ahead of the state assembly election in Rajasthan. The state goes to the election in December.

Veteran BJP leader Jaswant Singh’s son, Manvendra Singh had last month announced his decision of switching his side to Congress from Bharatiya Janata Party, at a rally. While announcing that he is leaving the BJP, Singh had said “Kamal ka phool badi bhool” (in Hindi) which means that going with the lotus –BJP’s election symbol – is a “big mistake”.

Singh had won district Barmer’s village Sheo constituency in 2013 assembly election in the state Rajasthan, with a margin of 31,425 votes.

As, the rajput votes are often considered as a deciding factor on many seats, Congress leaders proclaimed that Singh’s move of joining Congress will help bring rajput votes to the party in the assembly election.

BJP MLA Rajendra Rathore, who is a rajput, has, however, shown no concern on Singh’s move and said it will have “no effect in Barmer-Jaisalmer belt”. According to news reports, Rathor said, “The Congress is helpless. Therefore, it is adopting sidelined BJP leaders. It is his personal decision but this is a politically wrong decision. He is not going to get anything with this.”

As Singh has joined the Congress party, Congress is hoping to get supports from the communities like the rajpurohits, prajapats and charans. Rajasthan Congress Committee president Sachin Pilot has applauded Singh’s move and welcomed him in the party and said it will bring strength to the party.

Pilot said, “There is a long list of leaders quitting the BJP and the party should introspect why this is happening.” He further showed his concerns about the active participation of the leaders in the upcoming state elections in Rajasthan.

Jaswant Singh, who is in coma from the last four years, was denied for the ticket of Barmer-Jaisalmer constituency by the BJP in the 2014 Lok Sabha election. Then he contested the election as an independent candidate and lost his seat to the BJP’s Colonel Sonaram Choudhary.

Jaswant Singh’s supporters has showed their resentment and blamed Rajasthan chief minister Vansundhara Raje. The supporters then carried their rally around Manvendra Singh and termed it an issue of “swabhiman” (self-respect).