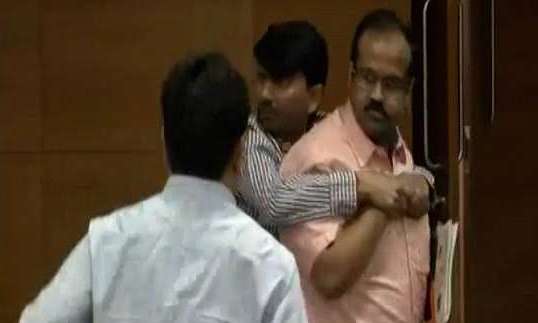 New Delhi: The BJP headquarters in Delhi witnessed an unexpected scene when a man hurled a shoe at BJP national spokesman GVL Narsimha Rao during a news conference, on Thursday. The man who hurled shoes at Rao was later identified as Shakti Bhargav, who is a doctor by profession.

It is not clear that why he threw a shoe at Rao.

As soon as GVL Narsimha Rao started to speak, the man suddenly stood up and hurled a shoe at him. The BJP workers and security guards immediately took him away from the conference hall. After the incident the man has been sent to a police station.

Media reported that Rao was speaking to reporters and criticizing the Congress for defaming Hindus by filing “false cases” on Hindutva activists, including Sadhvi Prgya Singh Thakur, when the man threw a shoe at him.

The Bharatiya Janata Party has fielded Sadhvi Pragya, who is the prime accused in the 2006 Malegaon blasts case, from Bhopal parliamentary seat against senior Congress leader Digvijaya Singh.