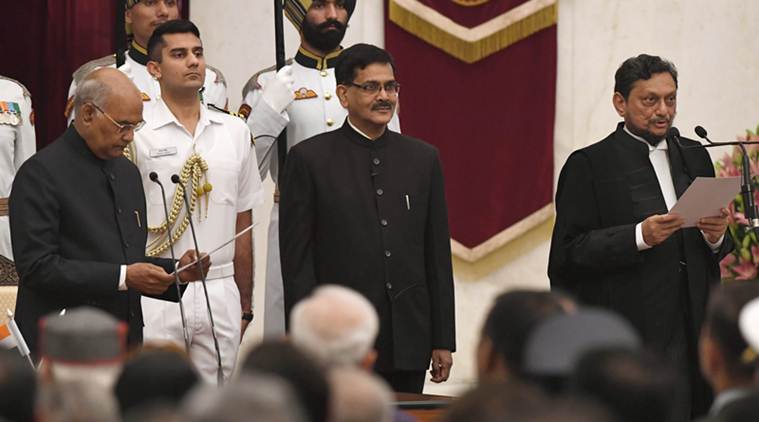 Justice SA Bobde (right) being administered the oath of office as the 47th CJI by President Ram Nath Kovind (left).

New Delhi: Justice Sharad Arvind Bobde, the most senior judge in the Supreme Court after former CJI Ranjan Gogoi retired, sworn in as the 47th chief justice of India by the president, Ram Nath Kovind, at a ceremony in Rashtrapati Bhavan. CJI Bobde will hold office of the top judge of the country until April 23, 2021.

Justice Bobde, who was born on April 24, 1956 in Nagpur, comes from a family of lawyers. His grandfather was a lawyer and father the attorney general of Maharashtra in the early 1980s.

Justice Bobde had a distinguished career in law. He completed his graduation at SFS College Nagpur and studied law at the Nagpur-based Dr Ambedkar Law College, in 1978. He enrolled as an advocate on September 1978, practiced at the Nagpur bench of Bombay high court. He became a senior advocate in 1998.

In March 2000, Justice Bobde was appointed as an additional judge of Bombay high court. He then joined as the chief justice of Madhya Pradesh high court in October 2012 and was soon elevated as a judge of the Supreme Court of India, on April 12, 2013.

Soon after taking oath as the 47th CJI, Justice Bobde held an open court and took a few decisions. Among them was the bail application filed by Kapil Sibal, who is representing PC Chidambaram – the former Union finance minister – who is in custody for over 90 days for his alleged involvement in the INX Media scam case. The CJI, responding to Sibal’s plea, just said, “Either tomorrow or day after.”