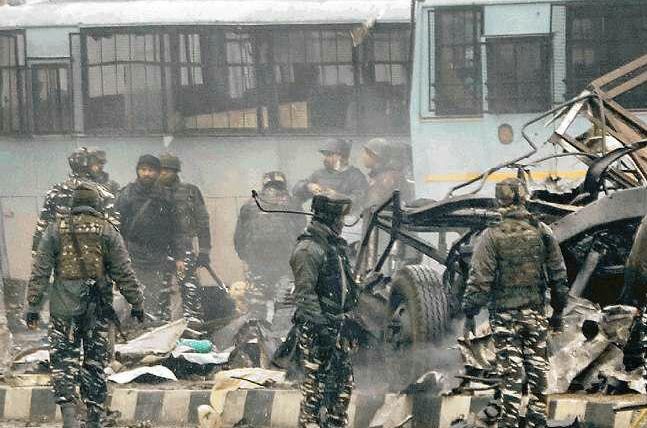 Soldiers near the mangled remains of the CRPF bus that was attacked by a suicide bomber in Pulwama.

New Delhi: The Indian high commissioner in Pakistan, Ajay Bisaria, has been called to Delhi, on Friday, for consultations in the wake of the Pulwama jihadist attack, which was carried out on Thursday. The decision came hours after India summoned Pakistan’s top envoy and lodged strong protest over the killing of 42 CRPF soldiers in the attack by the Jaish-e-Muhammed.

Earlier in the day, India summoned the Pakistan’s high commissioner to India, Sohail Mahmood, and lodged strong protest over the suicide attack.

The terror attack by JeM left 42 CRPF soldiers dead and five others critically wounded. The bus was part of a convoy of 78 vehicles CRPF travelling from Jammu to Srinagar.

Prime Minister Narendra Modi, in statement, said “the blood of the people is boiling and forces behind the act of terrorism will be definitely be punished.”

Earlier, on Friday, India revoked the “most favoured nation” status given to Pakistan following the suicide attack on the CRPF convoy.