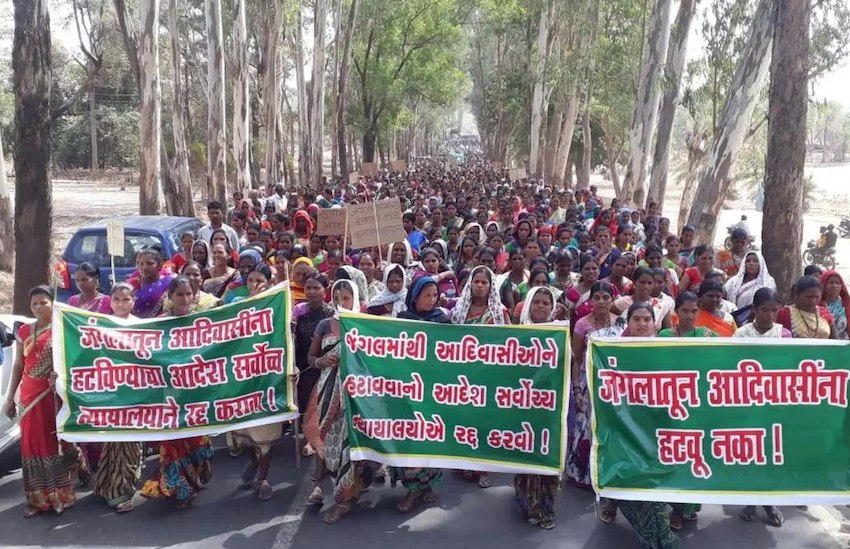 New Delhi: Tribals and dalits from across the country called for a Bharat bandh, on Wednesday, in protest against the Supreme Court’s order to states to evict forest dwellers from forest lands and the University Grants Commission’s new 13-point roster system, under which each department is taken as a unit for implementing recruitment and reservation policy for teachers that will reduce jobs for scheduled castes, scheduled tribes and the other backward classes. Various tribal and dalit groups held silent marches in many parts of the country.

The bandh evoked mixed responses across the country and normal life was unaffected, largely due to the peaceful nature of the protests. However, in Bihar, some clashes between the protesters and the police were reported from Bhojpur, Madhepura, Jehanabad and Arwal, which led to shopkeepers shut markets in fear.

In Odisha, tribals from Maoist-dominated area in Gajapati district held a rally protesting against the possible dilution of Forest Rights Act to clear the way for infrastructure projects such as roads, railway lines, electricity towers and irrigation canals. The tribals alleged that Prime Minister Narendra Modi-led government was trying to take away rights of tribes. They feared that “Modi’s re-election may hurt the environment and poor communities, including indigenous people”.

Various opposition parties including the Rashtriya Janata Dal and the Congress supported the protest. In Patna, senior RJD leaders and party workers staged a protest march and dharna in order to support dalits and tribals.

Congress President Rahul Gandhi, while extending support to dalit and tribal groups to provide forest rights to tribals and job security for ad hoc teachers, took a dig at Prime Minister Narendra Modi and the Bharatiya Janata Party in the wake of the Bharat bandh.

He also said “keeping dalits on lowest priority in society has been in the DNA of the Rashtriya Swayamsevak Sangh and the BJP”.

Gandhi also urged the Union human resource development minister Prakash Javadekar to restore the “200-point roster system”, in which the entire university was taken as a unit for reservation and recruitment, of reservation mechanism for faculties in universities.

West Bengal chief minister and Trinamool Congress leader Mamata Banerjee also came out in support of the tribals who have been demanding forest rights. Banerjee, on Wednesday, tweeted: “We have always supported the rights and the aspirations of the dalits and adivasis. We will continue to do so. We are always in favour of protecting their interests. We are fully by their side.”

We have always supported the rights and the aspirations of the Dalits and Adivasis. We will continue to do so. We are always in favour of protecting their interests. We are fully by their side