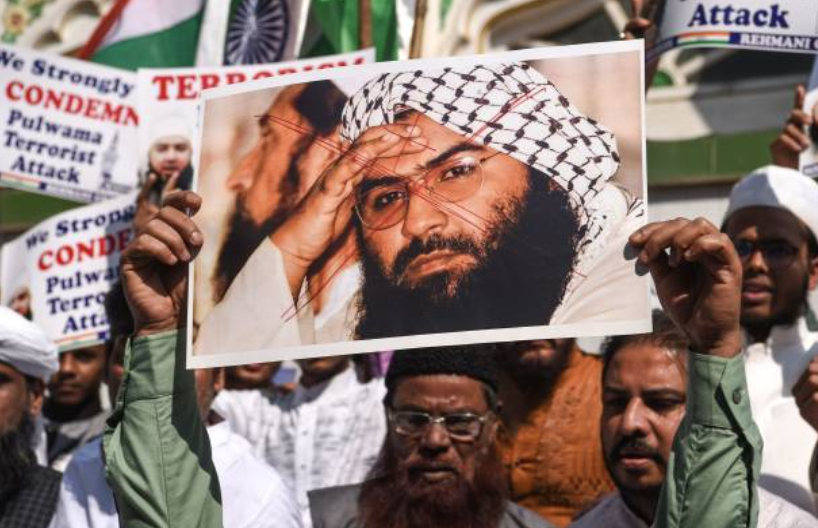 A man holding a placard with the photo of Masood Azhar during a protest in Mumbai against the Pulwama attack.

New Delhi: The United Nations security council, on Friday, condemned the Pulwama terror attack in the “strongest terms” and held Jaish-e-Muhammed accountable for being sponsors of terrorism, as the wait continued for France to introduce a motion to add JeM founder Maulana Masood Azhar to a list of UN-designated terrorists.

The UNSC, in a statement, on Thursday, said, “The members of the security council condemned in the strongest terms the heinous and cowardly suicide bombing in Jammu and Kashmir, which resulted in over 40 Indian paramilitary forces dead and dozens wounded on February 14, 2019, for which JeM has claimed responsibility.”

It was approved by all permanent and non-permanent members of the council, including Pakistan’s all-weather friend China, which had been resisting to include Masood Azhar in the UN list of global terrorists. France, along with the United States and the United Kingdom, is expected to move a proposal to declare Azhar a terrorist, including JeM, the outfit he founded, subject to UNSC sanctions under Resolution 1267.

The UNSC statement contains specific language that India had proposed via partner countries, including the naming of JeM and bring the perpetrators of the Pulwama attack to justice. On February 14, a JeM suicide bomber targeted a CRPF convoy on the Jammu-Srinagar highway and killed over 40 personnel.

France, along with the United States and the United Kingdom, is expected to move a proposal to declare Azhar a terrorist, including JeM, the outfit he founded, subject to UNSC sanctions under Resolution 1267.

The UNSC, in a news statement, said: “The members of the security council underlined the need to hold perpetrators, organizers, financiers and sponsors of these reprehensible acts of terrorism accountable and bring them to justice, and urged all States, in accordance with their obligations under international law and relevant security council resolutions, to cooperate actively with the government of India and all other relevant authorities in this regard.”

The UNSC condemnation is a blow to Pakistan as it points to the country’s direct support for terrorist groups operating from its soil.