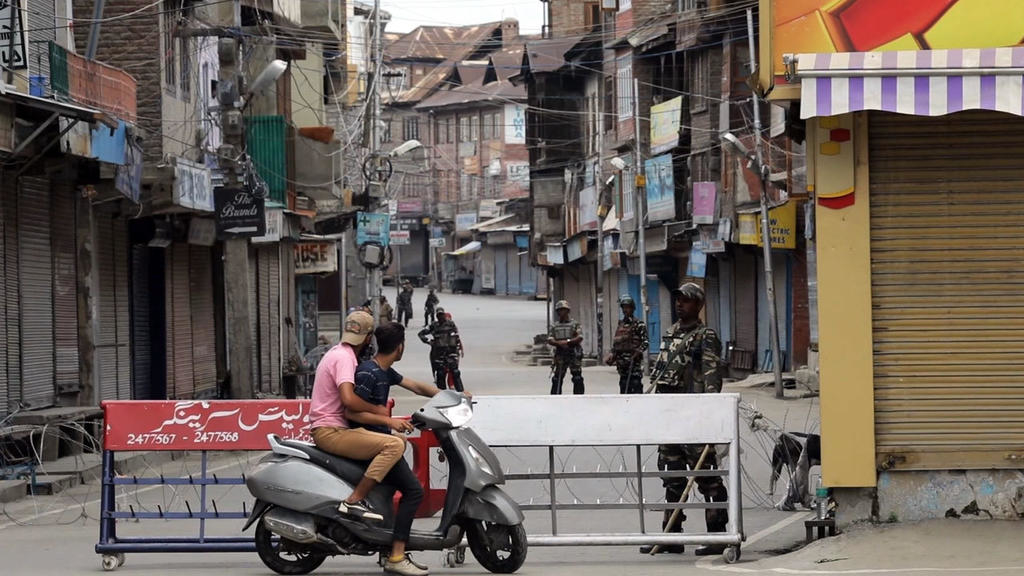 Two youths on a scooter watch as security men stand guard at a deserted street in Srinagar.

New Delhi: Diplomats from different embassies, including senior officials from the United States and the United Kingdom, have contacted officials from India’s ministry of external affairs to express concern over the current situation in the Kashmir valley and that said they were watching the developments closely, the Hindu reported quoting government sources. It must be noted that just a few days ago, the US president, Donald Trump, after meeting the prime minister, Narendra Modi, had said Kashmir was a bilateral issue beteen India and Pakistan and he said he was confident that Modi would handle the current situation properly.

India diluted the constitutional provisions to abrogate the special status given to the Jammu & Kashmir and bifurcted the state into two Union territories, earlier this month. Since then, the Kashmir valley has been under a virtual lockdown with internet and telephony severely resitricted to prevent violent protests.

A US state department spokesman while commenting on the issue, has said, “We continue to be very concerned by reports of detentions and the continued restrictions on the residents of the region. We urge respect for human rights, compliance with legal procedures, and inclusive dialogue with those affected. We welcome Prime Minister Modi’s statement that Jammu & Kashmir will soon return to a normal political status.”

“We call on all parties to maintain peace and stability along the Line of Control and to prevent cross-border terrorism. We continue to support direct dialogue between India and Pakistan on Kashmir and other issues of concern,” he said further. The comments have been made available by the US embassy in New Delhi on Thursday.

The comments came three days after US President Donald Trump and Prime Minister Narendra Modi had discussed the situation in Kashmir in France and concluded that India and Pakistan could resolve the issue bilaterally.

Meanwhile, Human Rights Watch, on Thursday, has issued a statement requesting government to lift the restrictions in Jammu & Kashmir that violated international human rights law. “Broad, indiscriminate, and indefinite restrictions on fundamental freedoms, including the right to free expression and to provide and receive information,” violated international human rights law, the statement said.

MEA spokesman Raveesh Kumar, while responding to the US state department statement, clarified that the restrictions are necessary to prevent violence and to tackle terrorist threats. “The local [J&K] govt is handling the situation with maturity and restraint. Not a single life has been lost not a single bullet has been fired. We hope normalcy returns to the state as soon as possible,” he said while briefing reporters.