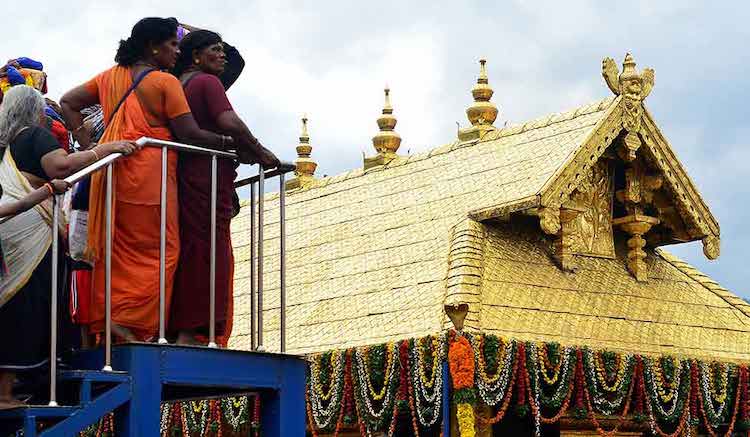 Women in a queue near the Sabarimala temple.

New Delhi: The Kerala government, on Friday, has confirmed that 51 women, aged 10 to 50 have visited the Sabarimala shrine during the recent pilgrimage season. According to media reports, the state government has also submitted the list of 51 women to the Supreme Court.

Senior advocate Vijay Hansaria, appearing for the Kerala government confirmed the news. They said that over 7,500 women had registered online for visiting the temple out of which 51 women have managed to enter the shrine. However, Surendran has refused to give further details of the visit regarding which route the women took while visiting the shrine or whether they reached the sannidhanam (main temple), etc.

He said, “It is not the duty of the state government to confirm whether these women had their darshan or what they did. The only thing I can confirm is that 51 women used the virtual queue system to ascend the shrine.” He has also said that anyone who has doubt about the authenticity of the list can check the list submitted by the government to the Supreme Court.

However, according to some media reports, many of the women in the list say the figure isn’t correct. A 42-year-old woman mentioned in the list turned out to be a man from Tamil Nadu.

The Kerala government has taken the list of women devotees that visited the temple from the state police. However, the senior police officers too have refused to comment on the discrepancies in the list.

A police officer said, “We don't know whether the 51 had actually made it to Sabarimala. We prepared the list based on the QR codes which we issued to devotees who reached Pampa. We have no idea whether they have travelled to the sannidhanam and had darshan.”

Meanwhile, the Supreme Court, on Friday, has ordered the Kerala government to provide adequate security to the two women devotees – Bindu Ammini and Kanakadurga – who had entered the temple earlier this month, which triggered massive protests in the state. The women had requested the apex court for round-the-clock security after threat to their life for entering the shrine. Recently, one of the two women, Kanakadurga, was allegdly assaulted by her mother-in-law.  The women have also filed the petition in the court asking to order all authorities not to perform purification rite in the temple after a visit of any woman.

The head priest of the temple had performed a purification rite after the visit of two women devotee to the shrine of Lord Ayyappa.

• Arunachal Pradesh MLA Tirong Aboh, 10 others killed in NSCN(IM) ambush
• In a major reform, Army to increase number of combat-worthy officers in forward units
• Switzerland to share information on Indians’ bank accounts there
• Ayodhya dispute: Supreme Court declines to refer to higher bench to decide if mosque is integral to Islam
• Darul Uloom Deoband issues advisory for students not to travel unnecessarily on Republic Day