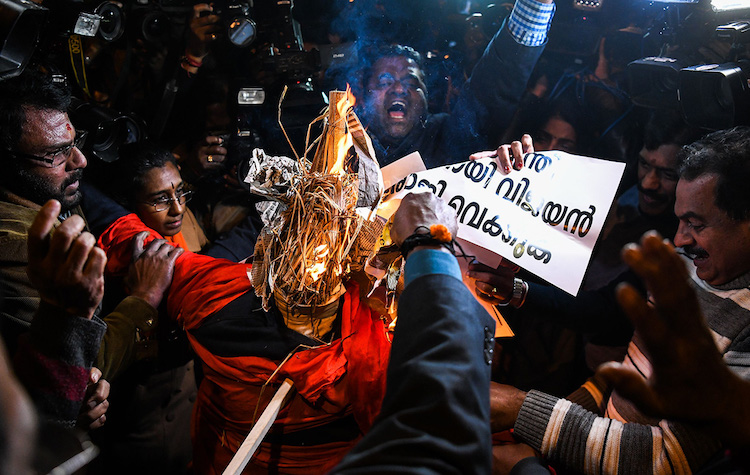 Protesters burn an effigy of Pinayari Vijayan over enabling women to enter the Sabarimala Ayyappa temple.

New Delhi: Soon after the news of two women in their early 40s had entered the Sabarimala temple with police protection, on Wednesday, became public, violence erupted in many parts of Kerala. The clashes between protestors and supporters of entry of women in temple have resulted in disruption of public life in the state.

Many CPM offices and residences of some party leaders were also attacked by the protestors. Around 559 cases have been registered, 745 people have been arrested and 628 people have been taken into preventive custody so far. Thiruvananthapuram, Thrissur, Palakkad, Kozhikode, Malappuram, Kasargode and Kannur are the most affected districts by the clashes. Tourism and local businesses have also been suffered as activists forcibly closed them down. University examinations have also been postponed.

The biggest opposition parties, the Bharatiya Janata Party and the Congress have extended support to the protests against the state government. Kerala chief minister Pinarayi Vijayan has blamed the BJP and Rashtriya Swayamsewak Sangh for the violence.

While calling it a “conspiracy for political gain”, the CM said, “The trouble started after the Sangh Parivar forces went on a rampage attacking police, damaging numerous vehicles. We have decided that at no cost will the authorities be silent and very strong action will be taken.”

Kerala has been on the edge since the Supreme Court had ordered to allow women of all ages to enter the Sabarimala temple in the last year. Several protests took place to oppose the verdict of the apex court.